KGI Securities analyst Ming-Chi Kuo has issued a new research report claiming that Apple is expected to unveil its iPhone 5S and lower-cost iPhone alongside iOS 7 this June, with the devices coming available in July. Versions supporting the time-division duplexing (TDD) standard used by China Mobile are said to follow in September.

We expect Apple will introduce its new iPhones and iOS7 in June, and start shipping the new iPhones (5S and low-cost model) in the FDD version in July. Both dates are earlier than last year’s roadmap. We attribute this to: (1) an effort to avoid repeating the fatal mistake of last year of the delayed iPhone 5 launch, which gave competitors room to grab market share; and (2) the new iPhones this year are mainly designed on the basis of the current iPhone 5, which suggests development time could be reduced.

Kuo says that all of the new iPhone models, including the lower-cost iPhone, will support LTE, with differentiation coming in other specs.

[W]e expect the product differentiation between iPhone 5S and iPhone 5 will be: (1) computing power, with iPhone 5S to run on the faster A7 application processor; (2) the camera, with iPhone 5S being equipped with Smart Flash, ensuring photo quality using white or yellow flash according to lighting conditions; (3) iPhone 5S will have a fingerprint chip under the Home button, improving security and usability; and (4) the low-cost iPhone 5 hybrid casing of fiberglass and plastic will make it lighter and slimmer than general plastic casing and easier to make in various colors. However, we still think it will be heavier than iPhone 5S, which will have an aluminum casing. Thus, even form factor will be an area of differentiation. 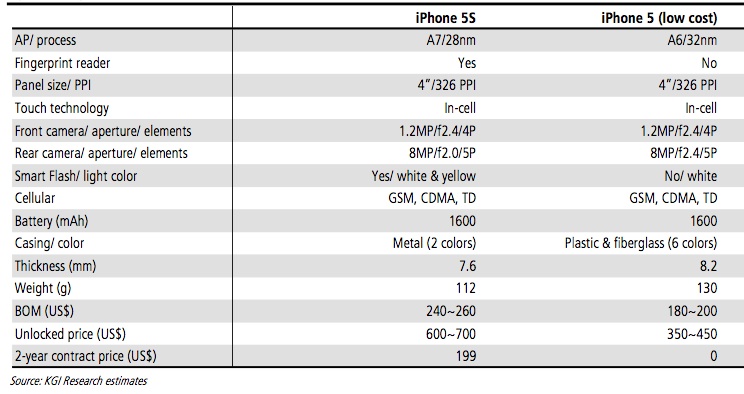 Kuo##Q##s iPhone claims are very similar to ones he laid out in his 2013 Apple product roadmap back in mid-January, but the fresh report suggests that Apple is still on track and his fresh comments on a TDD iPhone suggest that Apple may indeed be very close to bringing the iPhone to China Mobile, the world##Q##s largest carrier.

Kuo has a rather solid track record, having accurately predicted a number of Apple product announcements in recent years. As a result, his research reports have been followed with increasing interest.