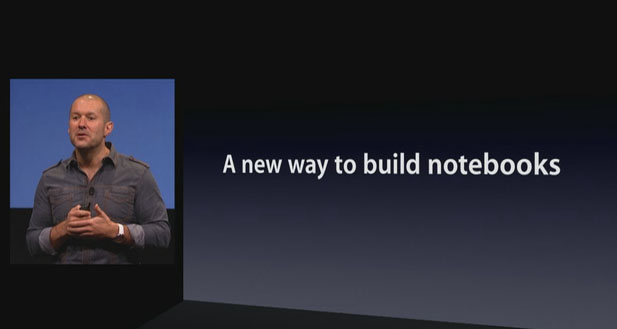 Along with all of the redesigned  Mac Pro and upcoming iMac refresh news we’ve been hearing,MacRumors claims some reliable knowledge pertaining to the design of the upcoming MacBook Pro refresh that will allegedly sport a brand new case:

MacRumors has heard reliable confirmation that the next revision of Apple’s MacBook Pro line will utilize a new case design for the first time in several years.

MR pointed out a February iLounge piece that asserted that 2011 will see the “all new design”described as “a big milestone” for the MacBook Pro family. iLounge reported that this new design was under development at the time at Quanta Computers, a contract manufacturer.
Unfortunately, that’s where the information ends.  MacRumors, like iLounge, has just heard there is going to be a change but nothing more on specifics or timeframe.

we have no specifics on what the next MacBook Pro might look like, though many have previously speculated that Apple will take cues from the MacBook Air line.

The current unibody design that uses a series of machine processing stages to craft the notebook case from a single piece of aluminum is two and a half years old and was reported first by 9to5mac.
It was unveiled at the October 2008 notebook presser held at Apple’s Cupertino campus and advertised as a new way to build notebooks. Steve Jobs invited Jonathan Ive, Apple’s design guru, on stage to share the details behind the unibody process and Apple even did a video to show off the manufacturing stages.
The benefits of the unibody case include sturdiness, greater structural integrity and a much reduced failure ratio due to a lesser number of parts used. The MacBook Pro was last updated two months ago with Sandy Bridge processors, the new Thunderbolt interconnect technology, better graphics and other tweaks.
0
SHARES
FacebookTwitter
GoogleLinkedinPinterestWhatsapp