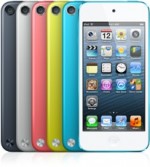 Following up on a report last month from Jeffries analyst Peter Misek claiming that the next-generation iPhone could launch in the middle of this year with as many as 6-8 colors, Topeka Capital Markets analyst Brian White has issued a report today indicating similar information. White also believes that Apple could offer the device with multiple screen sizes.

Our checks indicate that the next iPhone will have more choices for customers. This entails an expansion in both the color patterns and screen sizes with the next iPhone (i.e., likely called the iPhone 5S) that we currently believe will be launched in May/June with certain supply production starting in March/April.

White believes that the addition of multiple color choices for the iPod touch late last year was a “testing ground” for Apple and that the company is now moving toward bringing similar option to the iPhone, and eventually to the iPad.

As for screen size, White believes that Apple may for the first time offer a brand-new model with multiple screen size options for different segments of the market.

Discussion of a larger screen size is particularly difficult to believe, given that Apple just transitioned to a taller screen with the iPhone 5, the first time Apple has changed the screen size on the iPhone since its launch.

In considering how Apple might make the iPhone’s screen even larger, essentially the same set of issues debated before the launch of the iPhone 5 appears: more pixels or same resolution at lower pixel density. The latter solution in particular likely offers little for Apple, as the company is almost certainly uninterested in lowering pixel density simply to offer the same amount of screen real estate at a slightly larger physical size.

As for the former, Apple increased only the vertical pixel count for the iPhone 5, allowing for a larger screen while still offering full compatibility with apps designed for the smaller screens of previous devices. It seems difficult to believe that Apple would undertake yet another increase in pixel count so soon after the iPhone 5 debut, particularly if it involved increases in both vertical and horizontal directions.