Apple’s stock is now down 20% since its all-time high set in mid-September, with investors concerned about the company’s prospects for the future amid a management shakeup and questions about where the company’s next major revenue growth driver will come from. Samsung’s rise to prominence in mobile device markets is also weighing on Apple as the iPhone’s market share growth has slowed or even declined in recent quarters. 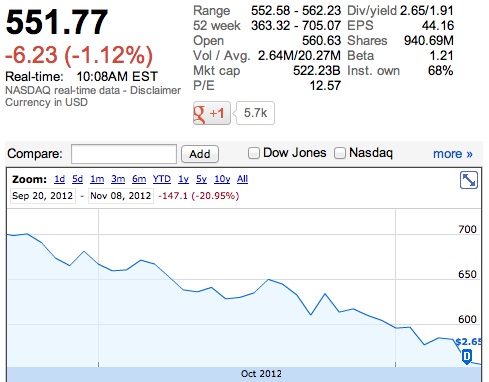 The difficulties being experienced by Apple are gradually gaining higher visibility outside of the financial markets, with ABC‘s Nightline running a segment (via Fortune) addressing the issues. The evening news show had previously been granted access to Foxconn factories producing Apple products in response to public criticism over worker treatment at the facilities.


Apple is expected to have a monster holiday quarter on the strength of the iPhone 5, iPad mini, fourth-generation iPad, and updated iPod and Mac models nearly across the board. But with Foxconn still struggling to meet demand for production of the iPhone 5, which is Apple’s primary revenue driver, there are some concerns about whether the quarter’s performance will be quite as big as many are hoping for.
1
SHARES
FacebookTwitter
GoogleLinkedinPinterestWhatsapp