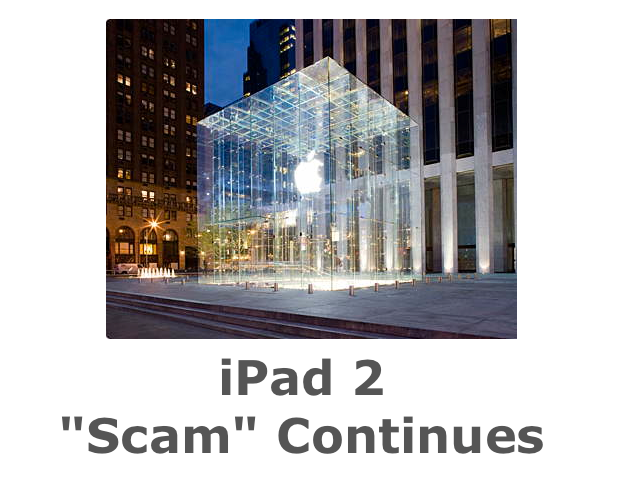 A fresh story in The New York Post confirms third-party iPad 2 buyers remain a presence outside the famed Apple Store on New York City’s Fifth Avenue. This means would-be tablet buyers are stilling finding it hard to secure one of the new iDevices on their own. The crew of Asian black-marketeers took just three hours to snap up nearly all of the new iPad 2s available at Apple’s flagship Retail Store outside of FAO Schwarz.
According to The Post, “more than half of the 400 in line at 8 a.m. — nearly all of whom were Asian — hand over their purchases to the group’s ringleaders in exchange for cash.”
Naturally, shut-out buyers are furious.
Ljubo Jovacevic, 36, of the Upper West Side told The Post:

“It’s because of the scam I can’t get an iPad.”

We’ve told you about problems in NYC before, and it is unfortunate they are continuing.
Nevertheless, there does not appear to be a short-term solution to thwart these individuals, who are selling their wares to others in NYC at inflated prices or shipping them to China.
0
SHARES
FacebookTwitter
GoogleLinkedinPinterestWhatsapp