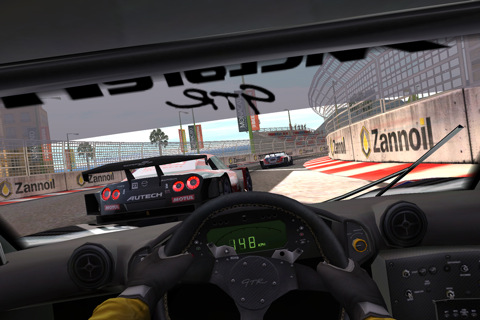 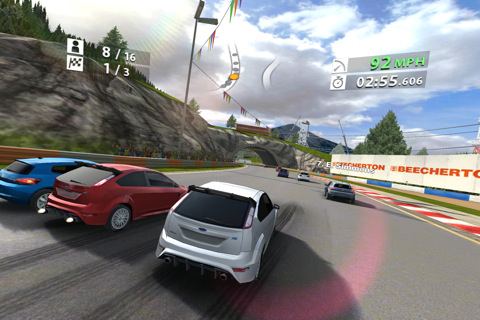 When Apple unveiled iPad 2, they also advertised a new video converter designed to mirror whatever is displayed on the tablet’s screen to an external HDMI display by upscaling content to full HD 1080p resolution. It works seamlessly with any third-party application unlike before when only a handful of apps on the App Store were written to specifically support video output. In the case of games, the $39 Apple Digital AV Adapter upscales graphics from the iPad’s native 1024 by 768 pixel resolution to full HD 1920 by 1080 resolution.
We are now hearing that the PowerVR SGX543MP2, the GPU unit of the A5 chip with ninefold jump in graphics performance, can drive full 1080p 3D graphics. According to TouchArchade, the next update to Firemint’s excellent Real Racing 2 HD will enable full 1080p video output in 30 frames per second – without upscaling, as demoed in the below video:

This is a first for any iOS game, as other games have built in video out support but run in the native resolution and aspect ratio of the iPad. Real Racing 2 HD, on the other hand, will run full screen with no black borders and at native 1080p resolution without scaling.

If other game makers follow suit, Apple needn’t develop a standalone gaming console, as some have hoped. With the A5 chip making its way into a next-generation Apple TV and future iOS devices, we could be able to play console-quality games on our TV via a pocket-sized device. From the YouTube video description:

With full support for high-definition, 1080p output – a first for any iOS game – in the next major update, Real Racing 2 HD will be the perfect title to see the full potential of Apple’s latest hardware. Relish crisp, gorgeous graphics at full screen 1080p, running at rock-solid frame rates, with an unbeatable hands-on, precision control method that’ll have your console green with envy. Real time telemetry puts your iPad 2′s display to work while your big screen takes care of the track-side action.