Teardown wizards over at iFixIt have peeked inside one of the new iMacs. Not surprisingly, Apple’s engineers re-used many design directions from the previous generations. The 21.5-inch model (EMC 2428) they tore apart scored “a very respectable 7 out of 10 Repairability Score” because it’s“moderately difficult” to access the hard drive and optical drive.
It’s possible to upgrade your Sandy Bridge processor, but that requires taking out the logic board which voids warranty.

If you want to remove the logic board, you have to snake it out from the rest of the iMac — a combination of pulling up, as well as away from the casing. After a little bit of jiggling, it comes right out.

Surprisingly, it’s now possible to just “swap out the GPU board for another one” because  the GPU heat sink easily deatches from the logic board.

Replacing the CPU and GPU is possible to do, but you need to remove the logic board from the computer.

However, bear in mind that removing the logic board is “a pain” because it requires fiddling with lots of connectors and it must be wiggled out of the computer. Also, retaining the pristine appearance of the LCD and glass cover when reassembling the machine is “nearly impossible”. 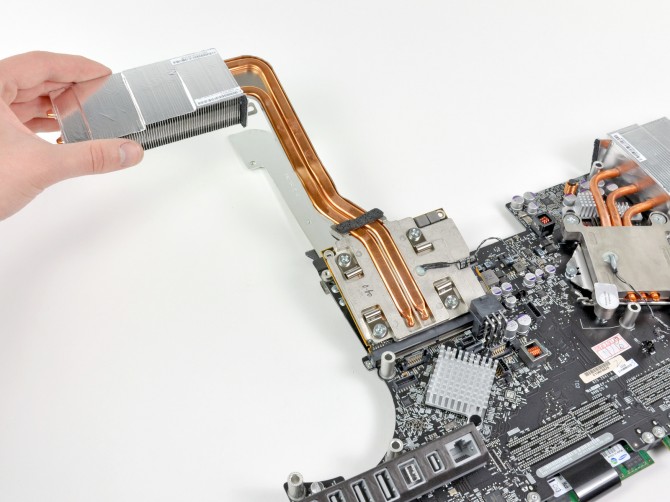 You can now swap the GPU board on the new 21.5-inch iMac for another one. Replacing the CPU is also possible after you remove the logic board from the machine.
The LED display provided by LG is the same model used in the previous-gen iMac and the Thunderbolt IC is similar (but not the same) to the circuitry found in the 15-inch MacBook Pros. An optional solid state drive (a build-to-order option now available on both 21.5-inch models and 27-inchers) goes beneath the optical drive.
Broadcom supplies the BCM2046 Bluetooth module, the same one from the original MacBook Air. Broadcom also provides Integrated Gigabit Ethernet and Memory Card Reader Controller. They also found 512MB of Hynix-branded memory on the AMD Radeon HD 6750M GPU.
Another interesting observation:

It appears that both PCI Express and DisplayPort receive their own 10 Gbps data channel. That’s nice, as you don’t want your display competing with your external hard drive for bandwidth.

Check out the source link for more highlights. 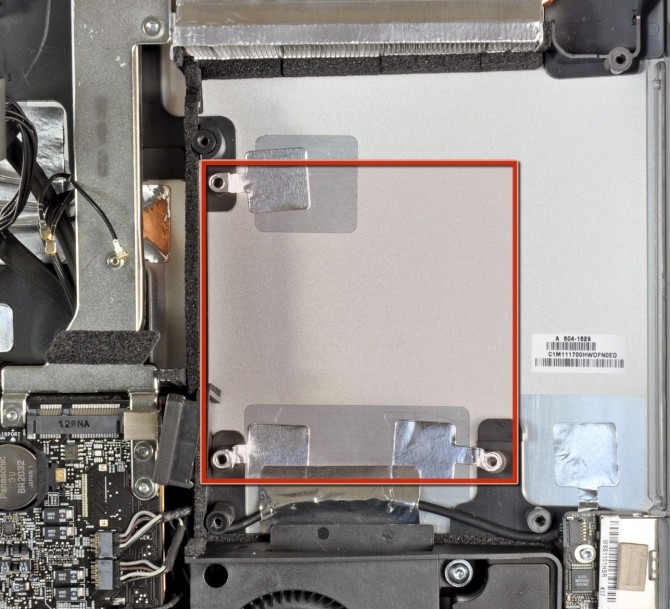