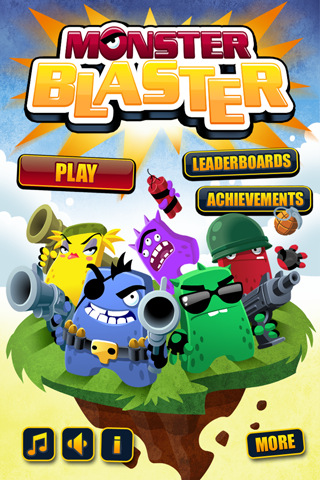 Monster Blaster ($0.99) by Touch Apps is an interesting twist on a “timeless classic…” called Tetris. Now some might argue just how timeless Tetris really is, but what’s more important is how exciting this game is. This is certainly not the first time somebody thought to change the color of blocks to amusing characters or even throw in interesting power-ups. However, this game is a very well polished example of that and plays smoothly. 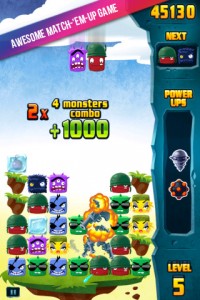 Instead of traditional blocks, the game is made up of characters: are tiny monster soldiers. Users will discover anything from a blonde creature with an army helmet, to what appears to be an angry cookie monster. This makes for an odd array of characters. Unlike Tetris though, they do not come in diverse shapes or amounts. Only two appear at a time, and they can be switched to any order and also dropped quicker. To eliminate the characters that begin to stack up, users must have four connected horizontally or vertically…diagonally won’t do the trick.
In addition to blasting away monsters by connecting four or more, they can also be eliminated using the wide assortment of power ups that are given. Amongst these power ups you’ll find anything from drills that remove entire columns, to different types of explosions. Power-ups are awarded through out the game as users receive combos for destroying four or more monsters. The game comes to an end and is lost when too many monsters are stacked and eventually reach the top of the screen, which is obviously the same concept as Tetris.
Overall, this is a great twist off of the timeless classic, Tetris, and is a really polished and refined game with high replay value for all ages. For those who really enjoy titles that derive from Tetris, this is definitely worth looking into. 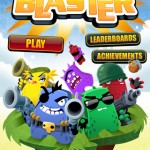 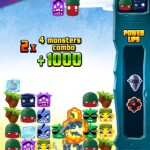 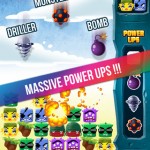 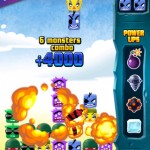