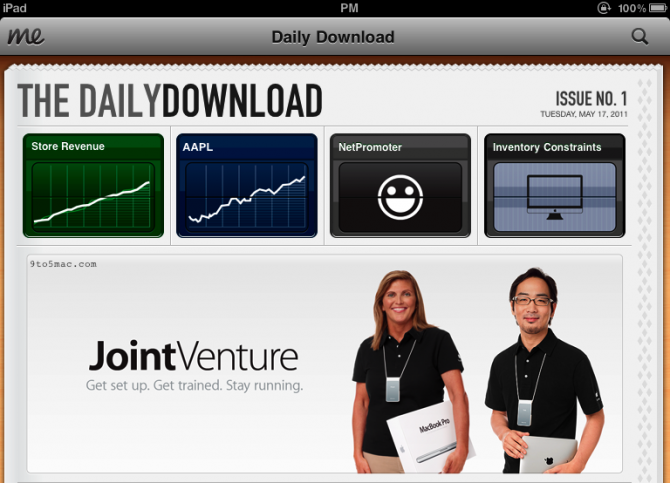 We’ve gotten our hands on the internal Apple RetailMe iPads and have been rifling through the interesting new features that debuted for Retail employees on Monday.  First is obviously the Daily Download, which is a well-produced internal Daily ‘newspaper for employees’.  It is incredibly stylish and functional and and much better than the previous web-based version that existed before.  We have many more screenshots below (and there is more!).
The new iPads are imaged with: RetailMe, Apple Connect, Apple Directory, Concierge, and strangely enough, the Easy Pay application (huge credit card readers on the way?!), as well as the standard Mobile Genius and iRepair.
But there is something more interesting.  One of our trusted Store sources believes that the huge download that employees will be doing over the weekend is for installing Lion (!!) on Store machines.

The “gigs of data” for sunday, as far as I can tell from the general consensus around the store and some of my contacts is that we will infact be downloading OS X Lion images and installing on all FOH machines for a Sunday launch. Nothing else fits since all other visual content has already been pulled from the apple servers that we gather content from. Lion is the mutual feeling around the store, even from managers. Speaking of managers, they have been given a general idea about what is happening, but full details will be revealed to them on friday evening.

Obviously this is pure speculation at this point.  We’re more likely to believe that the gigs of data are multimedia for the launch or detailed instructions for the new store.