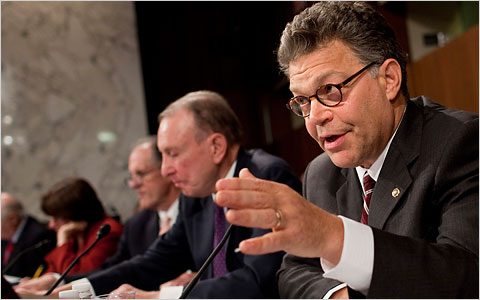 Senator Al Franken image: The New York Times
You know Apple messed up when your senator gets involved. In the case of the latest story about your iPhone collecting your geographical location, Senator Al Franken wants answers, reports CNN. Apple’s handling of the situation ticked off Franken enough to write a two-page letter to Steve Jobs, demanding “prompt response” to his concerns:

Anyone who gains access to this single file could likely determine the location of the user’s home, the businesses he frequents, the doctors he visits, the schools his children attend, and the trips he has taken over the past months or even a year.

It’s not known why Apple collects this data, but they’ve been doing this in every iOS release since version four, released a year ago. This means Apple’s been amassing a year’s worth of location data on you that gets stored on your computer in the iPhone backup file at each iTunes sync. Senator also couldn’t resist the urge to mention the dreaded viruses. Read on…

It is also entirely conceivable that malicious persons may create viruses to access this data from customers’ iPhones, iPads, and desktop and laptop computers. There are numerous ways in which this information could be abused by criminals and bad actors. Furthermore, there is no indication that this file is any different for underage iPhone or iPad users, meaning that the millions of children and teenagers who use iPhone or iPad devices also risk having their location collected and compromised.

Check out the source CNN link for a list of nine unpleasant questions raised in the letter.