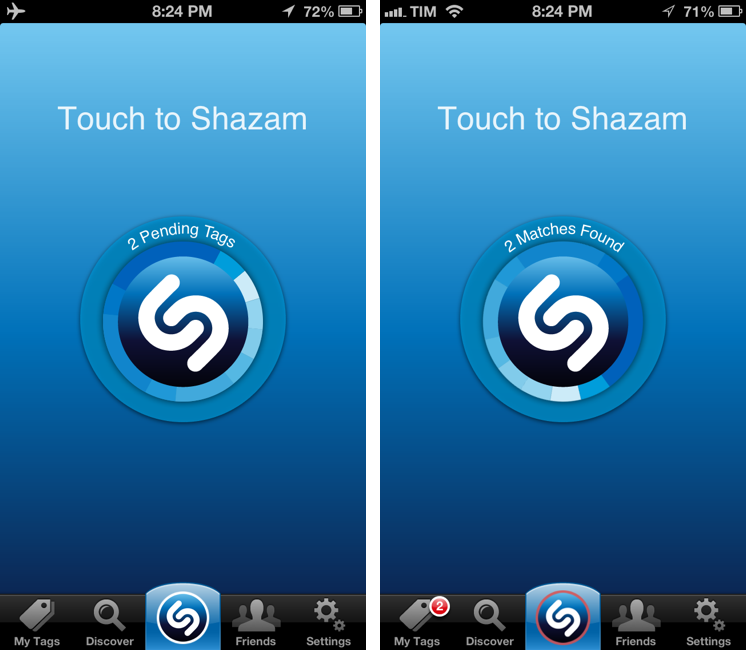 Shazam is, for me, one of those solutions made possible by our mobile era that, alongside Twitter and Rdio, I’d miss the most if I had to switch to a “dumbphone”. Shazam released today version 5.5 of their iPhone app, which I own in the Encore variation, and it’s got a few changes I really like.

The new icon was a bit of Home screen shock at first, but it plays nicely with the updated “listening dial” that animates and responds in real-time to audio captured by a device’s mic. It’s a nice touch. There are also other improvements such as better VoiceOver support, Google+ sharing (for Robert Scoble), and search for tagged songs. I don’t know exactly when this happened, but Shazam now properly opens tagged songs in the Rdio app, ready for listening.

The best feature of Shazam 5.5 is how the app handles offline devices or songs tagged in areas with poor reception. If unable to contact the Shazam servers, the app will queue tags, showing a count in the animated dial. When the Internet comes back, the app will automatically start tagging all previously queued item, display whether or not it has found matches, and highlight results in the My Tags screen and with a badge on the tab bar.

I’ve tagged songs using Shazam in the past, only to find out I didn’t have a 3G connection to get results immediately. This is a better solution, and judging from some first tests, it works as advertised. Shazam 5.5 is available on the App Store.