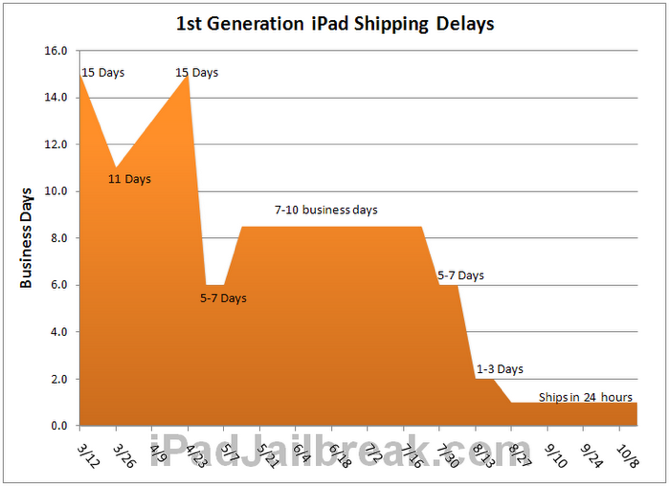 When the original iPad debuted last April, lengthy shipping delays indicated high initial demand for the device. Today’s news that the online Apple Store already has a 2-3 week shipping estimate on iPad 2 is a tell-tale sign of it quite possibly outselling its predecessor at launch. The original iPad shipments were similarly delayed to 2-3 weeks at launch, as noted by the iPad Jailbreak site. This time around, however, iPad 2 benefits from a much larger distribution footprint, with both WiFi and 3G units going on sale simultaneously in the US at Apple, Verizon and AT&T stores, in addition to Best Buy, Target and authorized Apple resellers.
Other factors playing in Apple’s favor: The iPad’s worldwide presence, its brand recognition, the tablet craze it ignited and the company’s world-class marketing. Let’s not forget that rival vendors are unable to match iPad’s price at this time, its battery life, thinness and lightness (and I’m not even mentioning industrial design and the overall sexiness).
Furthermore, two weeks from now Apple will begin selling iPad 2 in Australia, Austria, Belgium, Canada, Czech Republic, Denmark, Finland, France, Germany, Greece, Hungary, Iceland, Ireland, Italy, Japan, Luxembourg, Mexico, Netherlands, New Zealand, Norway, Poland, Portugal, Spain, Sweden, Switzerland and the UK, with more territories added “in the coming months.”
On the other hand, the novelty of a category-defining device launch is lacking as iPad 2 is generally seen as an incremental refresh rather than a revolutionary update. It’ll be interesting seeing whether buyers will form long lines later today and if iPad 2 outsells the original at launch. Apple shipped 300,000 iPads first day while conservative iPad 2 estimates are calling for at least twice that number during launch weekend. They shipped a millionth iPad a month later, two million units in less than sixty days and three million iPads in eighty days. Will you be standing in line this time?
0
SHARES
FacebookTwitter
GoogleLinkedinPinterestWhatsapp