For the past few days, we##Q##ve been following the story of the smaller A5 chip found inside of the recently tweaked Apple TV, seeking to understand what changes Apple has made in order to shrink the chip to roughly half the size of the previous A5 chip.

Yesterday, experts at Chipworks determined that the new A5 was still being manufactured by Samsung using the same 32-nanometer process used for the previous version, indicating that Apple had undertaken significant design changes for the chip.

Chipworks now has a full image of the A5 die, revealing that this smaller A5 chip contains only a single-core ARM CPU. Apple has listed the Apple TV as having a single-core A5 since the third-generation model launched last year, but the previous design involved a dual-core chip with one core disabled, while the new design contains just the one active core. The new A5 does still contain the same dual-core GPU found in the previous version of the chip. 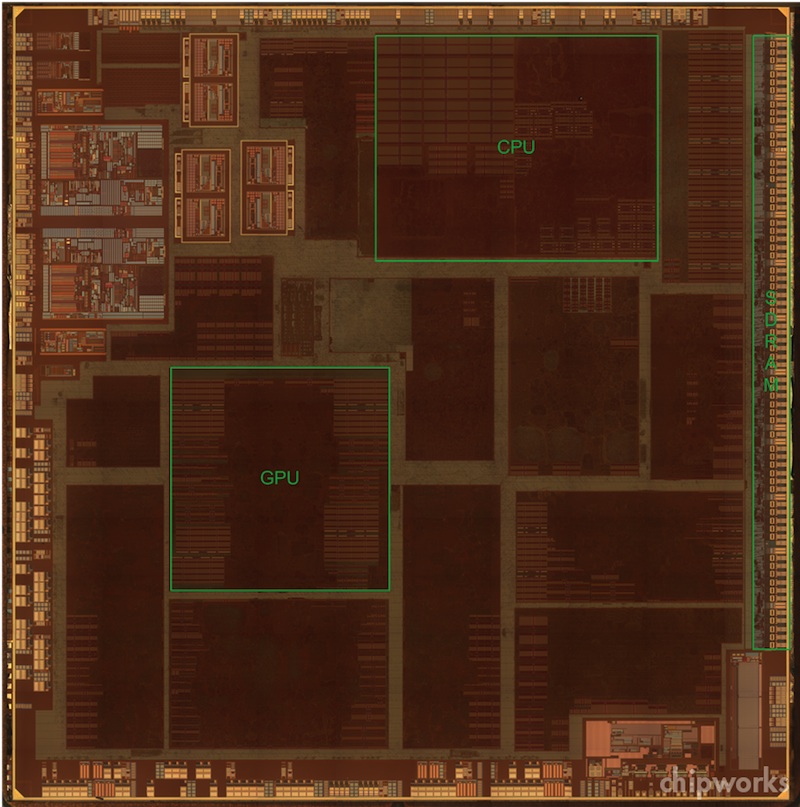 Chipworks##Q## Dick James tells us, however, that there must be more to the story in order to achieve a nearly 50% size reduction, but the firm has yet to determine exactly what other changes are contributing to the smaller die size.

A separate observation of interest involves the analog circuitry included on the chip. This new A5 chip appears to take advantage of optimized analog components such as resistors, capacitors, and inductors, yielding a mixed signal chip that seems to be a rather significant technical achievement at the 32-nanometer process node.

My guess is that the analog sections have been re-designed, always a work in progress when we get this small, since analog circuitry does not shrink anywhere near as predictably as digital. And as Jim said earlier, we think this is now in a mixed-signal version of the 32-nm process that allows extra passive components such as resistors, capacitors, and inductors, that is much more suited to analog stuff.

It is still unclear exactly why Apple has elected to redesign the A5 for the Apple TV, as it has been assumed that the company##Q##s “hobby” does not generate enough shipment volume to warrant such an investment in and of itself. As a result, it is possible that Apple has plans to use this chip in other products, although the single-core nature of the CPU design will likely limit the range of devices for which it would be suitable.