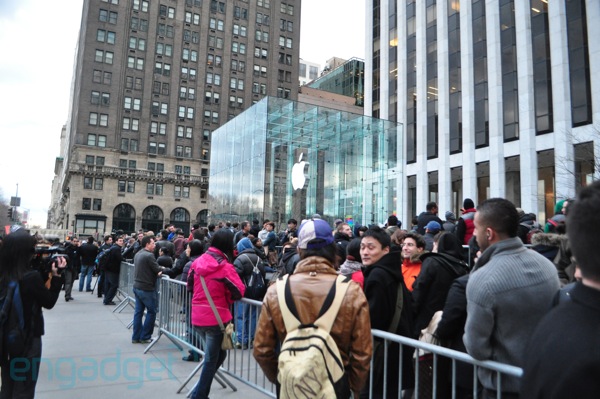 Following up on the previous report that Apple stores might open an hour early today, we’re receiving the news about a limited number of Apple stores receiving fresh iPad 2 shipments this morning. AppleBitch reports about “extremely limited numbers of iPad 2 devices” being distributed to at least one local Apple store. The publication was able to confirm that this retail spot did in fact receive new deliveries.
Our reader Zaid Khraibut tipped us on a similar re-stocking taking place at Apple’s Buffalo store at The Walden Galleria in New York. Apple employees allegedly told him that a new batch of devices is en route on Wednesday:

I just wanted to let you know that my local Apple Store (although getting some mixed replies), has confirmed that they will NOT be getting in iPad 2s on Tuesday, even with the store opening early. Many Apple employees were telling me they would definitely have stock on Wednesday though.

At this point, Apple is definitely unable to cope with high demand. At press time, the company’s online store listed iPad 2 with an estimated delivery time of 4-5 weeks. We’re still awaiting for that press release announcing a millionth iPad sold, though.
UPDATE [March 15, 2011 5:37pm Eastern]: Zaid followed-up saying store employees told him that they would have “very, very limited stock.”
0
SHARES
FacebookTwitter
GoogleLinkedinPinterestWhatsapp