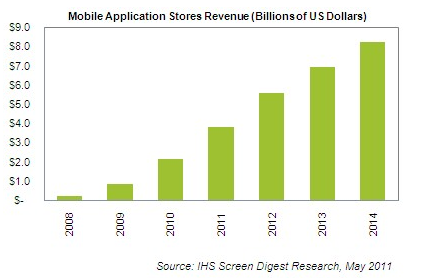 According to a yesterday survey of the app store economics by IHS iSuppli, Apple will grab more than two thirds of the overall market for mobile application stores this year. People will spend an astounding $3.9 billion this year alone on apps for their homescreens, a 78 percent year-on-year revenue increase. For comparison, when the App Store launched back in the summer of 2008, the market for mobile applications was worth just $206.1 million that year ($830.6 million in 2009). The App Store is projected to hit $2.91 billion in revenues this year, equaling to a 76 percent revenue share and a healthy 63.4 percent year-over-year growth. Total market for mobile apps will be worth an estimated $8.3 billion by 2014, iSuppli predicts.
In 2011 Android users are projected to spend a cool $425 million buying apps (why note more?) versus about $200-$300 million for the users of BlackBerry App World and Ovi Store. The App Store’s market share will shrink due to the growth of other mobile platforms, but Apple is still expected to command a 60 percent revenue share for mobile apps by 2014, running at an annual rate of five billion dollars.
Despite that fact that Android has more free apps than iOS and that Android Market is projected to overtake Apple’s mobile bazaar in terms of app count later this year, Apple still commands the most vibrant app community on the planet. A recent survey showed that even as Android is growingits market share, most developers remain loyal and continue preferring Apple’s platform over Google’s. As of September 2010, an estimated 35 percent of US adults had apps on their smartphones.
This ratio will grow as more mainstream users grow comfortable with customizing their experience with apps and as smartphones become ubiquitous. As a result, the number of apps available on various mobile bazaars and the resulting revenues will grow exponentially. Also, platform wars will get uglier.
0
SHARES
FacebookTwitter
GoogleLinkedinPinterestWhatsapp