T-Mobile announced that it will carry the iPhone 5 this morning at its “Uncarrier” event in New York City, alongside new pricing plans. Though the iPhone 5 is not a new device, several media outlets went hands-on with the device after the event to test out the phone##Q##s speeds, pricing, and feature set.

Gizmodo tested the iPhone 5##Q##s HD voice feature, which takes advantage of the wideband audio on the iPhone 5 to deliver better sound quality. On a T-Mobile iPhone-to-iPhone call, the difference was notable.

Calling from one T-Mobile iPhone to another, my caller##Q##s voice came through loud and clear. You know how sometimes cell-to-cell voice calls can sound a little fragmented? Like little bits of sounds are being dropped? This didn##Q##t have that. It was a much more natural sounded call. It was a bit richer, and definitely fuller. I wouldn##Q##t say it was like night and day, but it##Q##s definitely a noticeable improvement. 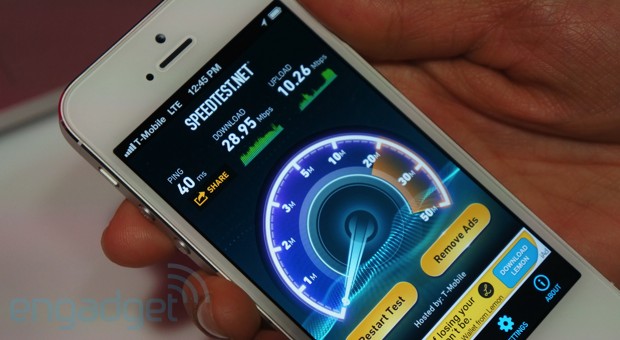 Engadget went hands on to test the T-Mobile LTE speeds of the Note II, the HTC One, and the iPhone 5, finding that T-Mobile##Q##s LTE network performed well.

Finally, we tested two separate iPhone 5s and, interestingly, saw different speeds. The first averaged 26Mbps down, the second 18 – despite being tested at the same time. [Upload] speeds hovered around 10Mbps and pings were always very good, typically under 50ms.

So, as ever numbers vary widely from test to test, but the network can certainly deliver some impressive numbers on average.

Engadget also clarified what happens if users buy an “Uncarrier” phone and then cancel service. As it turns out, a purchased T-Mobile iPhone must be bought out, but users also have the option of continuing to make monthly payments or trading it in for another device. When trading it in, T-Mobile will provide “fair market credit” for the phone.

Feature wise, T-Mobile phones typically ship with WiFi calling, which is designed to allow users to make and receive calls from a T-Mobile phone on any WiFi hotspot in the world. As Engadget points out, that feature will not be included when the iPhone 5 initially launches, but may be included in the future.

With T-Mobile##Q##s new UnCarrier plan, the total cost of the 16GB iPhone 5 is $579, with an upfront fee of $99 plus 24 monthly payments of $20. When payments are complete, the phone can be unlocked. In comparison, a fully unlocked iPhone directly from Apple costs $649.

T-Mobile##Q##s iPhone 5 will be in stores on April 12th and can be pre-ordered onlinebeginning on April 5th.