With Apple’s new 16 GB iPod touch becoming available today, the teardown experts at iFixit have taken the device apart in an effort to determine how it differs internally from its larger-capacity siblings. The 16 GB model lacks the rear camera and support for Apple’s Loop wrist strap, so iFixit wanted to see how those changes affected the layout of the device’s components. 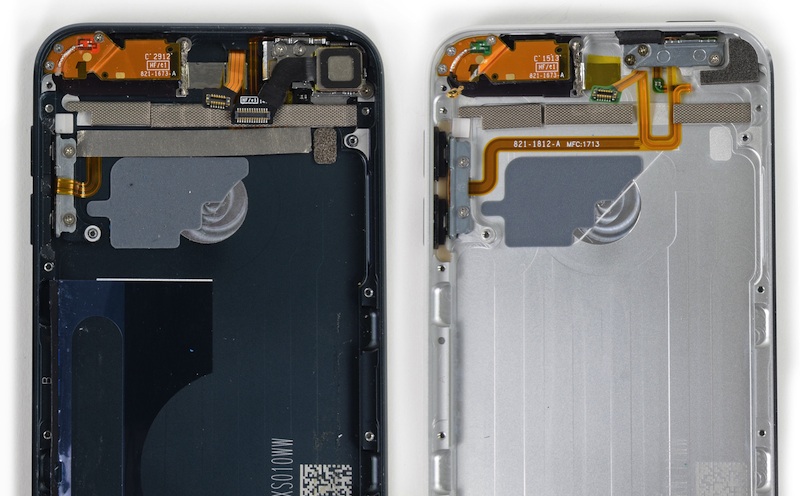 Comparison of original fifth-generation iPod touch (left) and new 16 GB model (right)
(Rear camera would be located at top right corner)
In the area of where the rear camera would be, the new iPod touch has a small void, while some of the flex cables have also been rerouted slightly. In addition, with the microphone no longer needing to be on the back of the device near a camera, it has been moved to the top edge of the device. Otherwise, the layout of components is the same as in other fifth-generation iPod touch models.

The logic board also appears nearly identical to the ones in the larger-capacity iPod touch models, housing all of the same chips with the exception of 16 GB of flash memory rather than 32 GB or 64 GB. The logic board also has a blank spot where the connector for the rear camera cable would have been.

With the exception of the flash memory, it appears that the ICs on the 16 GB model’s logic board are the same as those found on the 32 and 64 GB models: 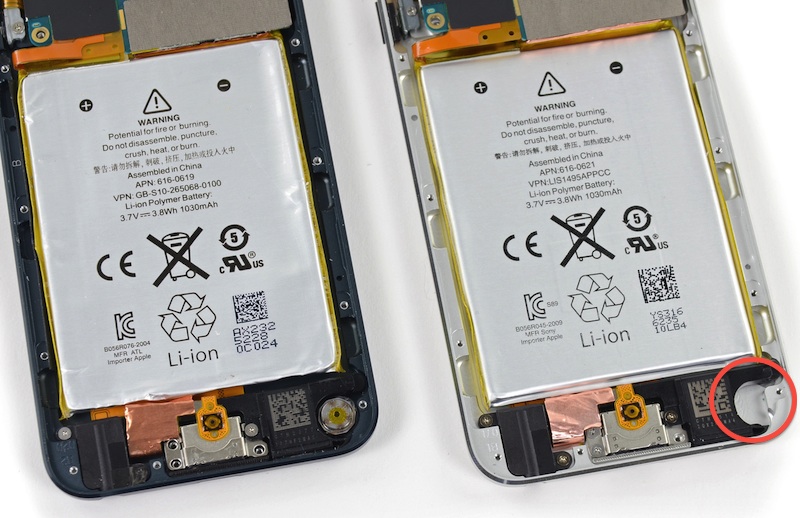 Comparison of original fifth-generation iPod touch (left) and new 16 GB model (right)
(Post for wrist strap would be located at bottom right corner)
Finally, at the bottom of the device, the new iPod touch similarly contains a void where the post for attaching the Loop wrist strap would be. Apple has used the same speaker design as in the larger-capacity models, carrying a curved edge that wraps around the Loop post in those models.

Apple’s new 16 GB iPod touch is priced at $229, with the addition allowing Apple to discontinue the fourth-generation iPod touch models it had continued selling at $199 (16 GB) and $249 (32 GB) alongside the more expensive fifth-generation models introduced late last year.