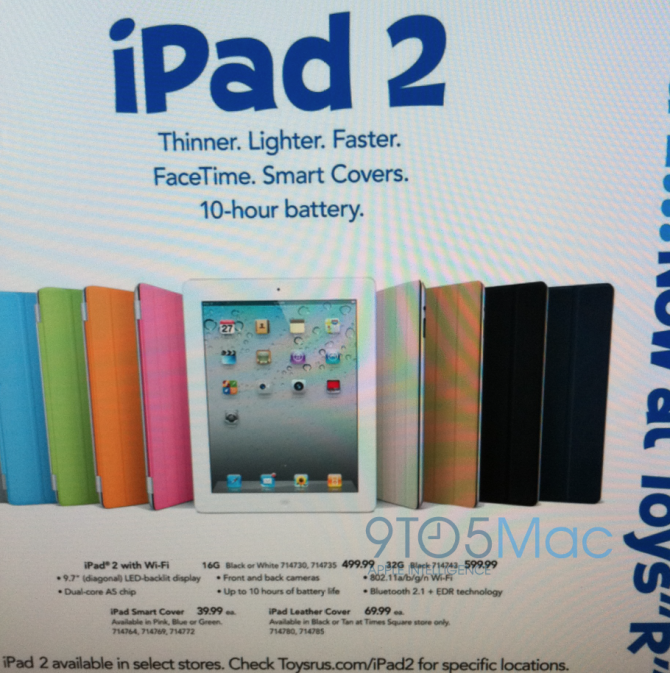 Following the rumors that Apple will expand their iPad 2 retail presence to Toys R’ Us, we have been told that the rumors are true and that Toys R’ Us will begin selling the iPad 2 tomorrow. Sources say that sales will begin at many Toys R’ Us locations tomorrow – Sunday, April 17 – with ranging availability. iPad 2 availability at Toys R’ Us will increase in the coming days and weeks.
According to an employee flyer/memo (pictured above) Toys R’ US will sell the 16 GB and 32 GB WiFi-only iPad 2 for $499 and $599, respectively. The 16 GB model will come in either black or white at Best Buy and the 32 GB variant will be black only. Toys R’ Us will also sell the Apple iPad 2 Smart Covers. Most stores will carry the $39 polyurethane option in pink, blue, and green. The Times Square, New York flagship store will carry the black and tan leather covers for $69.
Toys R’ Us has had a relationship with Apple for some time, selling iPods at their retail locations. Since Toys R’ Us’s iPod sales are in-store-only, we speculate Toys R’ Us will only sell the iPad 2 in-store. The iPad 2 launched on March 11th with great fanfare and is currently sold at Apple, AT&T, Verizon, Best Buy, Sam’s Club, Radio Shack, Target, and Walmart. Best Buy is also beginning some sort of iPad 2 promotion tomorrow, April 17th.
0
SHARES
FacebookTwitter
GoogleLinkedinPinterestWhatsapp