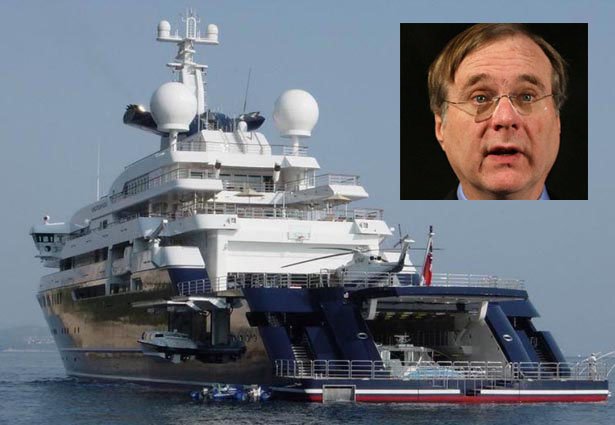 Paul Allen owns a megayacht named Octoups, seen above (please, no 007 jokes).
Paul Allen, the 58-year-old co-founding Microsoft billionaire, is on a roll again. He’s giving eyebrow-raising interviews left and right clearly meant to impress and inspire Apple fans and Microsoft haters. It’s a calculated move for a very prosaic reason – tomorrow sees the launch of The Idea Man, a memoir supposedly filled with dirty secrets about his complex business dealings with Bill Gates and Microsoft.
He first sat down with 60 Minutes’ Lesley Stahl and then did an interview with Wired’s Sam Gustin and other media outlets. Working with Bill Gates was like “being in hell,” he quipped. Microsoft“needs to accelerate the pace of product development” to better compete with Apple and Google,he said, the two firms with which he’s locked in an intellectual property dispute. “Unbelievable” is how he described Apple’s turnaround before launching into this Steve Jobs appraisal:

What he’s done with the iPod, the iPhone and the iPad – what a triple play there.

For more, watch a clip from the CBS interview right below the fold.
Gates and Allen used to engage in heated discussions that took a turn for the worse. Gates would call him names in front of other employees, Allen revealed in his book. The growing anxiety and anger and Stage 4 lymphoma he had been diagnosed with had ultimately led to his exit from the company in 1983 and resignation from the board in 2000. Allen owns the Octopus megayacht (pictured above), two professional sports teams, the Seattle Seahawks of the National Football League and the Portland Trail Blazers of the National Basketball Association, plus a whole bunch of expensive high-tech toys. Forbes says he’s seventeenth wealthiest American with an estimated net worth of $13 billion.
0
SHARES
FacebookTwitter
GoogleLinkedinPinterestWhatsapp