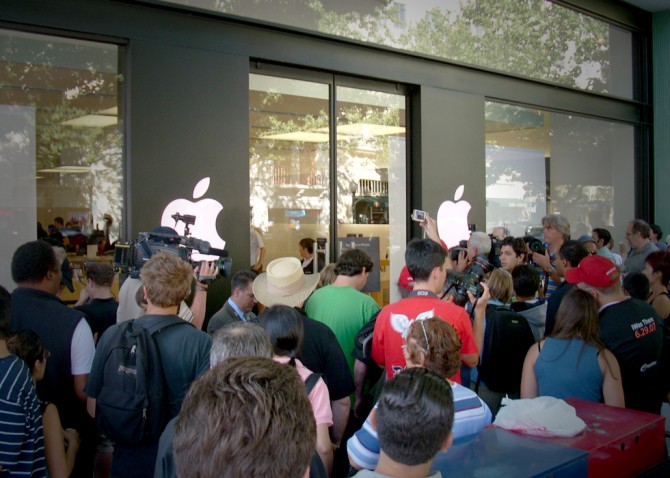 Typical scene outside an Apple Store that hosts a high-profile product launch
On May 19, 2001 Steve Jobs took a cherry-picked entourage of journalists on a tour of the company’s first brick-and-mortar retail outlet located in the second level of Tysons Corner Center in Virginia. “Literally half the store is devoted to solutions. Because people don’t just want to buy personal computers any more. They want to know what they can do with them,” he later explained in promo footage shown to the gathering of devotees at the Macworld Expo 2001 conference.
As with all things Apple, pundits predicted an epic fail. The store couldn’t possibly make enough revenue to cover the cost of overhead, let alone keep itself running, they argued. Naysayers came out of the woodwork all guns blazing, calling the expensive retailing experiment based on an unproven concept a huge mistake that would cost the company dearly. Some critics even called Apple crazy to gamble away its fortunes. And it wasn’t just the pundits and haters. 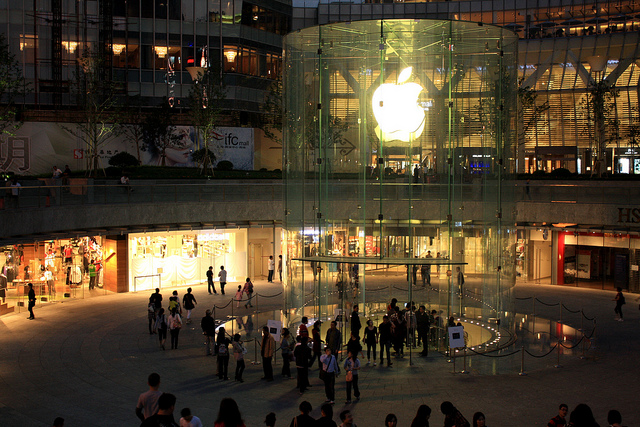 The spectacular glass cylinder store in Shanghai’s Pudong district opened for business last year. It is now the company’s most profitable store, a result of the “Apple effect” stemming from huge iPad and iPhone popularity in China
BusinessWeek confidently ran a story entitled Sorry Steve, Here’s Why Apple Stores Won’t Work. Retail consultant David Goldstein of Channel Marketing Corp. predicted, “I give Apple two years before they’re turning out the lights on a very painful and expensive mistake”. TheStreet.comopined that it’s “desperation time in Cupertino, California” in a story headlined Apple’s Scrapping the Bottom of the Barrel. And just last year, Simon Mills of London’s Daily infuriated Apple fans by comparing excited shoppers to“cult followers passively standing in front of screens, their faces riddled with the anxiety and discomfort of someone terrified they are behind the technological times”. No, really – that’s the quote.
But Apple Stores defied logic against all odds and went on to become a unique retailing venture which gave the successful California-based gadget maker a recognizable public face. The stores are Apple’s signature street presence, with their superior visual articulation that has been captivating fans worldwide and guiding every brand experience. As you know, Apple Stores turned ten today as Apple ended the March quarter with 323 stores and greeted one billion retail visitors. In addition to the US, Apple Stores today reach far-flung places like Australia, Canada, China, France, Germany, Italy, Switzerland, UK and Japan. 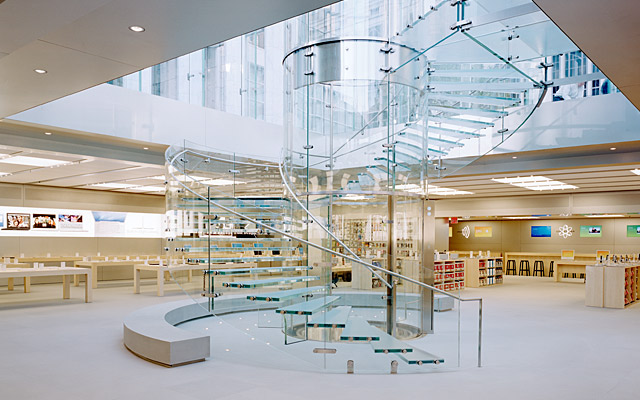 Glass staircase suspended mid-air, bright and simple furniture, latest gadgets that can be touched and played with – it must be an Apple store
Apple isn’t resting on its laurels. They are on track to open forty new stores by the end of September, of which three quarters are planned outside the US. New openings will include a fifth China store and high-profile retail outlets in Berlin and Barcelona. In all, Apple is now being praised as America’s greatest retailer. But what was it that had encouraged Apple to set out on such an adventurous yet risky journey in the first place?

Apple did not have a choice, really. In the early 2000s people used to shop for their gadgets at big-box retailers. Back then, Jobs had realized it was becoming increasingly difficult for his company’s gear to stand out on mega-retailers’ shelves, alongside computers from other vendors and with clerks lacking the expertise to communicate the many benefits of Apple’s products. The charismatic CEO reflected in a 2007 interview with Fortune’s Jerry Useem, “I started to get scared. It was like, ‘We have to do something, or we’re going to be a victim of the plate tectonics. And we have to think different about this. We have to innovate here’”. So Apple went about doing what they’d been best at – innovate. They needed, however, the right people for the job. But before that, Jobs uncharacteristically hired consultants to analyze Gateway’s retail approach “so I would not make some of the same mistakes they made”.

Clueless about running a retail operation on a large scale, Apple looked for outside help. They hired Gap’s retail executive Mickey Drexler who joined the board and poached Target’s merchandising wizard Ron Johnson who became chief of Apple Retail. The company then assembled a team of experts consisting of third-party design shops such as Bohlin Cywinski Jackson, Eckersley O’Callaghan, Gensler, Eight Inc. and ISP Design, Inc. They would work closely with Apple’s in-house design team lead by then rising star Jonathan Ive, with guidance from Ron Johnson and under the watchful eye of design nazi Steve Jobs. 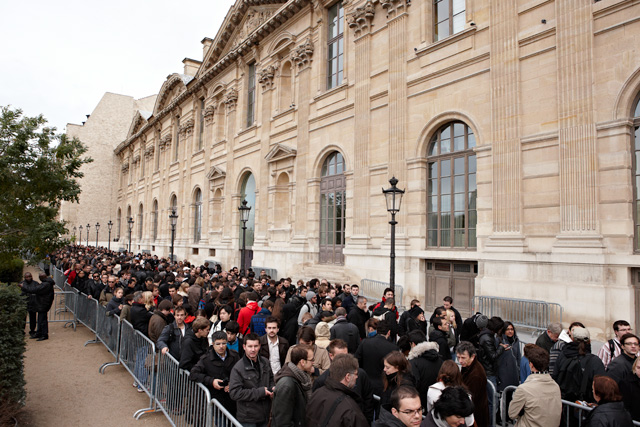 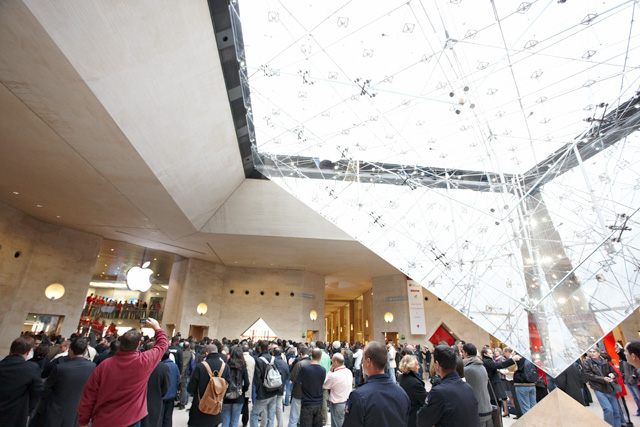 Apple’s landmark Carrousel du Louvre store in Paris, France (click for larger)
They had been perfecting a store prototypes at an empty warehouse until every detail checked against Jobs’ high expectations. Ron Johnson pioneered the concept of the store and the Genius Bar, an in-store area where customers go to meet hip experts, seek free advice and tutorials, get things done and so forth. Jobs initially hated the idea, but Johnson convinced him that Geniuses would become the cornerstone of the shopping experience. Johnson recalled in the Fortune interview:

When we launched retail, I got this group together, people from a variety of walks of life. As an icebreaker, we said, ‘Tell us about the best service experience you’ve ever had.’ Of the 18 people, 16 said it was in a hotel. This was unexpected. But of course: The concierge desk at a hotel isn’t selling anything; it’s there to help. We said, ‘Well, how do we create a store that has the friendliness of a Four Seasons Hotel?’ The answer: Let’s put a bar in our stores. But instead of dispensing alcohol, we dispense advice.

The big picture: Why own retail outlets matter

Apple stores are the money-making machines. Consider just a few highlights. Apple Stores greeted an astounding 71 million visitors worldwide in the March quarter. Quarterly sales climbed 32 percent on retail revenues of $3.19 billion, a 90 percent increase. In-store revenue from Mac sales surged 90 percent and per-store revenue was $9.9 million on average, a 67 percent increase. More than one in five Macs shipped during the quarter were sold in these stores, or 800,000 units.

At 25,000 square feet, London’s Regent Street retail spot is the largest Apple store in the world
In 2010 Apple Stores raked in some $3.2 billion in revenues, which amounts to approximately 13 percent of Apple’s total sales. Having own stores lets the company avoid sharing a markup with third-parties. This, in combination with Apple’s high margins that are the envy of the industry, yields substantial profits. Then there’s intangible. “Our stores were conceived and built for this moment in time – to roll out iPhone”, Jobs said in the 2007 Fortune interview. The legendary corporate showman would enthusiastically shared exactly the same sentiment at the iPad 2 unveiling in January of 2011.

One of the things that enabled us to roll out this technology so fast was our Apple retail stores. They were built for moments like this. They were built to take new technology and roll it out and educate customers about it and be there when they have questions and issue. Without these stores I don’t think we would have been as successful either. 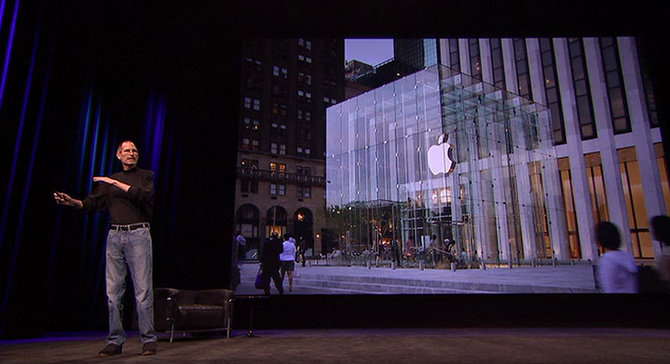 Suffice to say, iPad would have never become such a smash hit had it lacked substantial visibility provided by the many Apple stores, where people could waltz in, touch it and get a  feel for how truly category-defining a product the gizmo is

• Apple Retail employs 30,000 hip people
• average per-square-foot revenue was $4,300 in late 2009 versus $872 for Best Buy
• they spend about $315,000 per store on wood furniture
• flagship stores cost anywhere between $20 and $40 million versus about $1 for a small mall store
• the Boston store is the largest in North America
• the world’s largest Apple Store is located in London’s Regent Street, measuring 25,000 square feet
• the smallest outlet is the 540 square feet store Santa Rosa Plaza, California
• the Bondi store in Australia has a living tree inside
• flagship stores are found at landmark spots in Boston, New York City, Chicago, San Francisco, Tokyo, Osaka, London, Sydney, Perth, Montreal, Munich, Zurich, Paris, Beijing, Glasgow, Honolulu and Shanghai
• perhaps the most famous Apple Store is the flagship 32-foot glass cube New York City store on Fifth Avenue, open 24 hours a day
• 10,000 people applied for a job at Manhattan’s Upper West Side store in 2009, but only 200 were accepted
• more than half of the Macs sold in Apple’s retail stores are purchased by switchers
• Gary Allen’s ifoAppleStore, which passionately follows Apple Stores, has nearly 2,000 pages of information on all aspects of Apple’s retail store operation (and they have more amusing factoids)
0
SHARES
FacebookTwitter
GoogleLinkedinPinterestWhatsapp