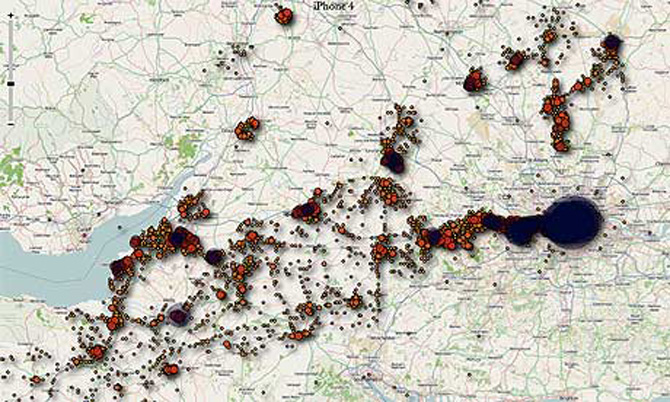 Above: A location map from an iPhone that had been used in the southwest of England
Privacy advocates are going to have a field day with this one. According to researchers interviewed by The Guardian, your iPhone keeps record of your whereabouts in a secret file that gets copied to your computer as part of iTunes sync. It gets spookier, the paper explains:

The file contains the latitude and longitude of the phone’s recorded coordinates along with a timestamp, meaning that anyone who stole the phone or the computer could discover details about the owner’s movements using a simple program.

The root cause of the problem is iOS 4 which, for some reason, silently tracks our geographical location. This means, the paper explains, that for some people there could be “almost a year’s worth of data stored.” Keep on reading…
Say someone steals your computer and decrypts said file. This may not be problematic for regular Joes, but it’s a big issue for those urged to keep their location private. If you’re a high-ranked executive in a corporation, a celebrity or some kind of a VIP, someone could steal your computer and plot your location history to determine where you live and work, your daily routine and more.
From there, thieves could plan on breaking into your house while you’re away. This reminds me of a similar privacy-related debacle pertaining to the carrier location tracking issue that Malte Spitz, a German Green party politician, made public.
He obtained a court order forcing Deutsche Telekom to hand over his location data spawning a six-month period from August 31, 2009 to February 28, 2010. During that time Deutsche Telekom had recorded his longitude and latitude coordinates more than 35,000 times, tracing him in places such as a train on the way to Erlangen. It was explained that a handset typically pings the network every seven seconds or so in order to determine the nearest cellular tower, allowing Deutsche Telekom to create a location history of their every user without them knowing anything about it.
The finding let to a heated debate as Spitz published his entire location history on the web. Eventually, the court ruling prevented such an unreasonable data retention. The problem could be even worse in the United States where telecommunication companies are not obliged to specify what data they collect about users.
0
SHARES
FacebookTwitter
GoogleLinkedinPinterestWhatsapp