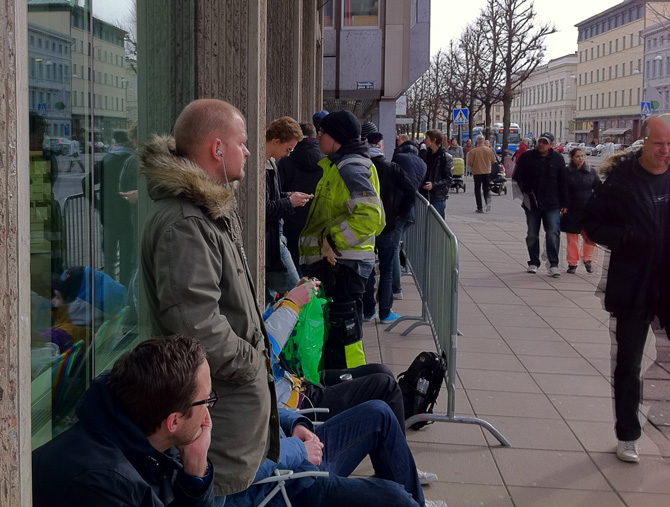 iPad 2 line in Gothenburg, Sweden. Thanks, Emil!
Long lines abound as Apple’s iPad 2 went on sale today in 25 overseas markets. Not all queues stretch around city blocks but many do, like the line outside Apple’s flagship store in London’s Covent Garden. There’s even a blog dedicated to iPad 2 queues in UK. Media reports describe the excitement and buzz factor – even with traditionally more reserved Europeans. Malls and plazas with Apple Store lines look the same the world over. iPad 2 is priced the same like the first-generation model, but in some countries it’s actually cheaper than iPad 1, including UK, Germany and Australia.
Analysts will be running their spreadsheets like crazy for rabid fans appear genuinely interested in getting their hands on the legendary device. Apart from tons of free coverage and steady cash flow, global iPad 2 launch is the ultimate test for Apple’s supply chain. Many are concerned that the crisis in Japan and the ensuing component shortages could hurt Apple’s well-oiled production machine that’s often the envy of the entire industry. Strong international demand and constrained supplies have prompted Apple to tweak shipping estimates for online orders today. 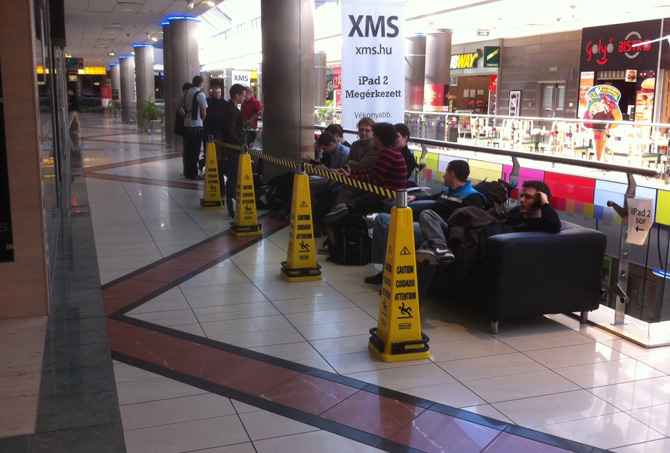 iPad 2 line in Hungary. More at Szifon.com, the biggest Hungarian iPhone blog
With international launch in full swing, many Apple stores list shipping estimates of 3-4 weeks, an increase over 2-3 weeks yesterday. This includes the online Apple store in Australia, New Zealand,Germany, UK and many other countries. In the US, online orders now show a 3-4 week wait, down from 4-5 weeks yesterday. This gives some hope Apple has gotten its act together at last. Send us your line images and tell us about your country’s iPad 2 launch experience in comments.