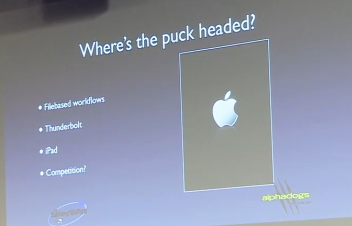 As part of a pre-NAB panel discussion, Mark Raudonis, head of post production at Bunim/Murray Productions (who says he attended Apple’s secret Final Cut Pro preview) says that Final Cut Pro will have support for Thunderbolt, iPad, File Based Workflows and will address competition, specifically Adobe and Avid…
Hit 3 minutes in the video below for some “additional metaphors” on Final Cut Pro which seems due either at NAB or around the show time:
via Macrumors.
You’ll recall that we brought you another first hand account last week and were the first to report last week that the NAB program was being shuffled around in order to make way for an Apple demo of Final Cut Pro.
0
SHARES
FacebookTwitter
GoogleLinkedinPinterestWhatsapp