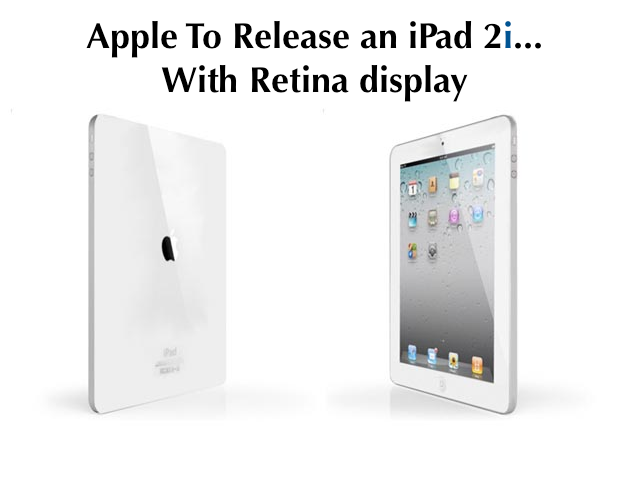 Apple is about to change the tablet scene once again just three weeks after the introduction of the iPad 2. According to numerous sources, the tech giant is expected to announce a special edition iPad at WWDC in June. The new iDevice, which we hear will be called the iPad 2i, will include Retina display and come in three different colors.
Apple’s decision to release the iPad 2i wasn’t made until shortly after the Cupertino, California-based company decided to delay the release of the iPhone 5.  Our sources, which want to remain anonymous, indicate Steve Jobs himself initiated work on the newest tablet soon after the iPad 2 was released in the U.S. on March 11.
The Apple CEO, we are told, was concerned that the iPhone 5 delay meant no new hardware would be released at its June 6 event.  To fill that void, the iPad 2i was born.
Says one source:

“Steve (Jobs) was angry about the loss of the iPhone 5 until September, and wanted to do something about it. It’s safe to say he was pissed.”

The iPad 2i is exactly the same as the iPad 2 model, except for two differences. First, it will include a Retina display. Second, it will be available in black, white, and for the first time, charcoal.
The new model, which will sell alongside the current model, will sell at a premium. Each unit will list for $150 more than its iPad 2 equivalent.
For example, while the 16GB Wi-Fi iPad 2 sells for $499, the same iPad 2i model with Retina display will sell for $649.
According to an unnamed Apple executive:

“Apple believes the iPad 2i’s Retina display is reason enough for the premium price.  Imagine watching “True Blood” on this type of screen. The red blood glistening on the screen will look simply amazing. And wow, can you picture Jesse Eisenberg’s eyes while watching The Social Network? Fantastic.”

“Reading Paul Allen’s Idea Man: A Memoir Of the Co-Founder of Microsoft, will simply pop off the screen in iBooks. It will be like the Fight Club only with words.”

One angry iPad 2 buyer told AppAdvice upon hearing this news:

“You mean I stood in line for hours TWICE to get my  hands on an iPad 2 that will be outdated in a few weeks! Will it work with my incredible blue Smart Cover?”

The iPad 2i is expected on store shelves in late July. And yes, it will work with Smart Covers.
Check out this exclusive video:
What do you think? Leave your comments below.
0
SHARES
FacebookTwitter
GoogleLinkedinPinterestWhatsapp