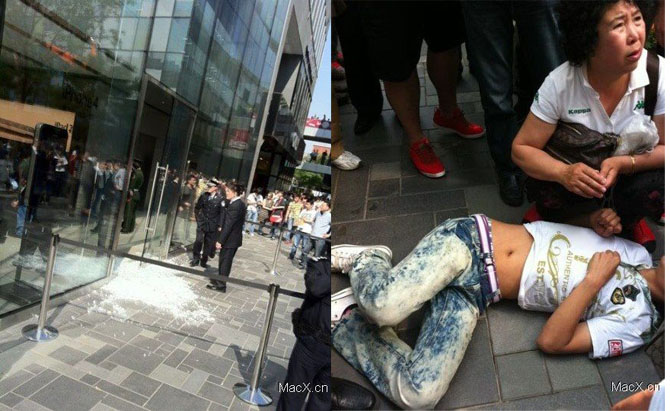 Pictures are just coming in but it appears that there was some sort of incident between “foreign Apple Store Employees” and some locals during the iPad 2 launch.  One account:

The afternoon of May 7, Beijing SanLiTun store Apple, crowds queued to buy the iPhone4 conflict with in-store staff. One stands more than 1.9 metres for expatriate staff armed with iron rods Brawl wounded four customers. A glass door of the store were hit and destroyed by excited crowds. Are 4-bit the injured have been admitted to hospital

Sanlitun Apple Store bloodshed, because too many people queuing waiting suddenly closed shop, where the weather is so hot multi-line Burongyia, Apple stunned party to a foreigner and a Chinese man actually hands-on, people with the scene confirmed the man was wounded also the guests lined up to buy Apple products.We look at the quality of foreigners, but also that, to earn the money we have in China is also the name of our people.

We’re not sure exactly what went down but it doesn’t look too good.
In other Apple Store glass smashing news, the Westlake Cleveland Apple store was robbed.  24 MacBook and 1 iPod stolen.  Perpetrators were last seen heading east (1999 Bone?)
More pictures of bloodied Chinese below: