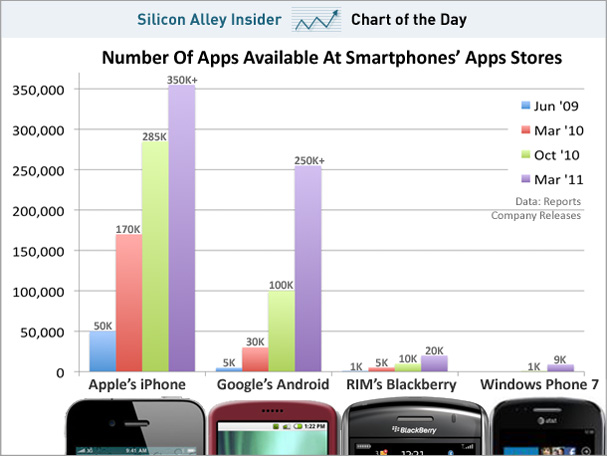 Based on historic milestones concerning the App Store and rival Android Market, a publication has guestimated that Google’s app bazaar will overtake Apple’s mobile application market “in the next few months,” at least when it comes to the number of apps available. Even though this may eventually come to be, the sheer number of apps means little in this game and here’s why.
Steve Jobs said at the recent iPad 2 unveiling that the App Store has 350,000 apps. The latest stats from Google peg the number of Android programs at 250,000 items. Business Insider’s Chart of the Day is suggesting this might change because the slope of the Android Market curve is steeper than that of the App Store. In other words, the publication is asserting, Android Market is growing at a faster rate than the App Store.
Be that is it may, the App Store is still the number one platform for mobile development. A lot of junk is still reaching Google’s application store. One facet to this problem are Google’s for-dummies web tools dubbed App Inventor that let everyone and their brother create simple apps without any programming knowledge. The lack of screening process doesn’t help either. The result: Too many low-quality programs add up to the overall junk – also increasing the app count, too. UPDATE: As noted by a reader, the apps created using App Inventor are not accepted in the Market.
MLB’s CEO Bob Bowman told SAI that Android app piracy is high because all users can sideload apps, not just ones that jailbreak (on iOS).  That is a discouragement to high end app developers.
Another problem plaguing Google’s store is the fact that Android users seem to be purchasing apps far less frequently than their iOS counterparts. Moreover, Android Market’s storefront layout makes app discovery unwieldy, while late introduction of in-app purchasing options and the lack of simplified billing mechanism derail the store economics. Meanwhile, Jobs tells us Apple paid iOS developers two billion dollars since the App Store’s inception a little over two and a half years – and that’s after Apple’s 30 percent cut.
Of course, that’s not to say things won’t change in the near future. Angry birds just hit 30 million downloads on Android (free but ad-based).  Android is a perfectly capable platform with a lot to offer, but Google still has a long way to go to if it’s to make third-party developers happy in the way the iPhone maker has done with iOS. Apple’s really good at this and iOS users have demonstrated time and again that they’re willing to pay for high-quality offerings from third parties. Of course, I have no doubt in my mind their Android counterparts are just as eager to pay for quality (see what I did here?).
0
SHARES
FacebookTwitter
GoogleLinkedinPinterestWhatsapp