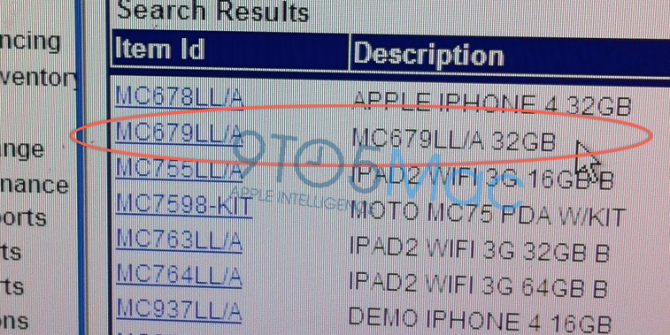 It’s real this time. After several false hopes along the way, Apple will finally release the white iPhone 4 very soon. We’ve been expecting an AT&T version since summer 2010 and reports of a Verizon version of the white model being in the works emerged earlier this week. Now, we have confirmation of this: Verizon is set to launch both 16 GB and 32 GB white iPhone 4 models and the devices have already popped up in Verizon’s internal inventory database. Apple has confirmed over and over again that the white iPhone 4 will come this spring (which is from now until early June) and independent reports claim that we’ll be seeing the white iPhone by the end of April.
The models popped up in the inventory today, leading us to believe the late April launch information is true. The screenshot (32 GB) above and the screenshot (16 GB) after the break do not specifically state the new models are white but based on the numbering system and information from sources the models are for the white iPhone 4. As you can see in the screenshots, the white version of the iPhone 4 carriers a number sequence that is one larger than the black model. The white iPhone 4 is MC679 and the black model is MC678. Same thing with the black and white iPad 2s. So, anyone still holding out for the white version?